Congratulations to the Boston Celtics: Champions of the world

With a crushing, decisive, convincing  131-92 win over the Lakers, the Celtics win their 17th NBA title and their first since 1986. Oh how sweet it is. I don’t remember the ’87 series as much but I can recall the 1988 finals when the Lakers pushed the Pistons to 7 games. It was painful. The Pistons could have won game six but didn’t.

The Lakers could not push this series to a 7th game though I give Kobe credit for being Kobe, he was impressive in the last game but this series and this championship belonged to Paul Pierce and the Boston Celtics.

Here are some myths which were shattered during the course of the series and which Lakers fans believed prior to the series:

Myth: The Lakers Bench is superior to Boston’s and will make the difference. 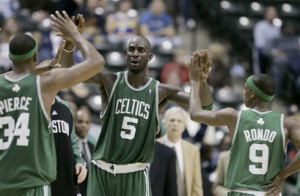 Fact: Not sure if these fans and so called experts were watching the key contributions made by Boston’s bench during the playoffs but if you take last night’s close out game alone, “Big Baby” Davis played almost eight minutes and contributed to the Celtic’s run in the 2nd quarter. Sam Cassell had 8 pioints in the 98-88 game 1 win and many rebounds. Leon Powe scored 21 in Boston’s game 2 win and James Posey scored 18 and Eddie House 11 when Boston won in LA 97-91 to go up 3-1 in the series. In fact, the Celtic’s bench outplayed Pau Gossol and the rest of the Laker’s vaunted bench players the entire championship series.

Myth: Kobe will take the Celtic’s defense apart, he has more championship experience than Boston’s big 3 and will be the difference in the series.

Fact: While a bonafide superstar, I still contend that Kobe did not deserve the NBA MVP, mostly because Garnett’s performance turing a last place team to first was more impressive. No matter, Kobe still had his moments but he wasn’t even on the floor in the final quarter of the last game when his team was getting blown out 89-60. While most people are comparing Kobe to Michael Jordan, the single best basketball player my eyes have ever witnessed, one must consider MJ never missed a shot when the game was on the line. I saw Kobe miss a couple of baskets that could have iced a Lakers’ victory on a few occasions this series.

Myth: The coaching edge goes to the Lakers with Phil Jackson having won 9 titles and Doc Rivers having none.

Fact: The coaching experience didn’t help the Lakers. Jackson could not find an answer to Boston’s swarming defense and his whining and crying over fouls in game 2 didn’t help matters. In the end, he could not prevent an onslaught that sent his team packing into summer vacation mode. Jackson also lost convincingly in 2004 when the Pistons took a Lakers team apart which some considered formidable, they still had Shaq and many other great players. Maybe the Zen master has lost his winning ways.

I could go on, but you get the idea, the Lakers fans were wrong. They were cocky at the start but were subdued and humbled by the Celtics who deserve to be called champions once again.

This entry was posted on Wednesday, June 18th, 2008 at 3:01 pm and is filed under Uncategorized. You can follow any responses to this entry through the RSS 2.0 feed. You can leave a response, or trackback from your own site.