Stan Lee in the house

I’m back home in the SGV thank God! I went out of town house sitting for a friend for a week and yesterday I got really home sick and was dying to get back. Even though I was only gone a week, it seemed like a long visit. We had a horrible heat spell over the weekend so I spent a lot of time either at a movie theater, outdoors or indoors in the AC.

In the interim, I went to Frank and Son’s in industry where the legendary Stan Lee made a rare Southern California appearance. The organizers of the signing didn’t do a very good job and there was hardly any ventilation at the hottest time of the day. I remember parking the car and having to walk a block or two in the heat and heading straight for the place where they were selling refreshing drinks. As for the signing itself, Stan was an hour late and because of the unbearable heat signed from 12-1 even though he was scheduled to be there much longer. 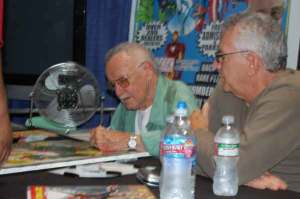 There were still hundreds waiting in line who had to get a refund for the $30 fee they were charged at the event. Still, most people seemed understanding when told the legendary writer and former President of Marvel comics had just come from a photo shoot and he is 85 years old, so  no one complained too much about his early exit.

Next I will post for you a few reviews from the books I have been reading this week and some other suprises like the latest issue of Marvel 1985 and the new Buffy which I truly enjoyed. Try to stay cool!

This entry was posted on Wednesday, June 25th, 2008 at 5:27 pm and is filed under Uncategorized. You can follow any responses to this entry through the RSS 2.0 feed. You can leave a response, or trackback from your own site.

2 Responses to Stan Lee in the house