The end of prep football 08 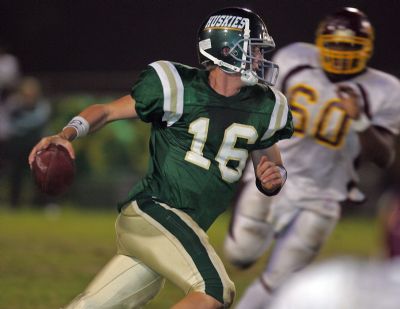 Sorry I have been mostly absent for so long. Yesterday’s thanksgiving celebration was a much needed break from last week where layout for the newspaper and covering events sapped most of my energies and time.

Today’s quaterfinal  CIF playoff game between South Hills and Diamond Ranch which I am covering tonight for the Walnut paper will probably mark the end of the prep football season for me. No more frantic drives to the Tribune offices to type up stories following the game on friday nights. No more cursing at myself if I accidentally take a wrong turn that may cost me precious moments on deadline. No more playing musical chairs, trying to find the designated computer station assigned to me in the prep department by the editors prior to typing up a story. From now on, I can take my time as the Walnut paper is weekly and has less strict deadlines.

According to the SGV Tribune, South Hills is coming into the game with a lot of question marks. All Star linebackers Wayne Goss and Chris Bowdne may not be healthy enough to play. Defensive end Alex Barrios will not play after being ejected in last week’s first round victory over Schurr. It remains to be seen whether the Huskies will match Diamond Ranch’s intensity. Despite a sub .500 record, DRanch knocked of Muir 21-7 to win their fourth consecutive game last week.   Should be a pretty good matchup. Happy thanksgiving weekend to everyone.

This entry was posted on Friday, November 28th, 2008 at 6:25 pm and is filed under Uncategorized. You can follow any responses to this entry through the RSS 2.0 feed. You can leave a response, or trackback from your own site.