Not a bad issue at all, wrapping up the Fray/Buffy universe crossover storyline. This issue was delayed and smart reviewers online have pointed out that its lateness mirrors the wait fans of the original “Fray” series had to endure to read the final chapter of the original 2001 story.

It does feel as the climax for this issue was a little predictable and maybe would have benefited from one more chapter. I enjoyed seeing Willow go dark again, even if we are talking about a different timeline or different reality but the inevitable confrontation with Buffy and Fray doesn’t pack nearly as much power as it should have.

Moline’s pencils don’t do the comic justice as his artwork seems below par of what he was producing in earlier chapters of the arc. In the opening installments, he depicted a dazzling futuristic world replete with flying cars and other minutia, but the latter part of this comic especially is flimsy at best devoid of some of that detail. 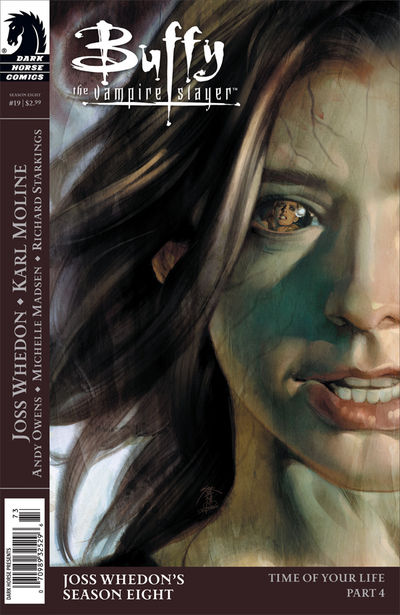 Of course, there’s the brilliant Whedonesque dialogue which is a requisite of any Buffy comic present in Xander and Dawn in the forest against the forest creatures where a few chestnuts are the byproduct of Xander’s sardonic wit. We have been so spoiled by it for so long that we don’t always appreciate it.

There’s an interesting reveal at the end of the comic which I won’t spoil. It looks as though the next issue may be a stand alone romp the kind that succeeded in issue five, and as interesting as I find alternative timelines, I am glad to get the climax to the Frey universe and to return to the story proper in the current Buffy universe. I hope more of the regulars come back like Giles. It’s hard to believe that this comic has been so good for 19 issues and there hasn’t been a single appearance by any vampires with a soul. Because of contractual issues with IDW, I am not sure we will ever see them, though that would be a pity.

This entry was posted on Saturday, December 6th, 2008 at 3:18 am and is filed under Uncategorized. You can follow any responses to this entry through the RSS 2.0 feed. You can leave a response, or trackback from your own site.