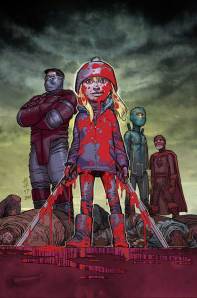 OK, due to school and work, I got my hands on this very late so most of you have probably read it, but for those who never did, you are missing out on one of the best books currently on the stands. The dialogue alone as written by Mark Milllar is clever and funny, even if every other word is the f-word or a curse word. What makes it funny are the allusions to comics and if you read comic books on a regular basis, you will get more than a chuckle from the dialogue in this book.

Besides, how can anyone resist finding out the secret origin of Big Daddy and Hit-Girl? Even Kick Ass himself is excited to be involved in a plot ripped straight out of conventional comics: Secret identities, scary bad guys and top-secret headquarters. Super-hero team ups are a staple going back to the golden age, but Millar and Romita Jr. turn that convention on its head and that is what makes “Kick-Ass” so much fun to read every single time. Big Daddy is an obvious spoof of the Punisher with a twist as Hit-Girl is his little girl trained for murder and mayhem.

This is probably the tamest and less violent edition of this comic, Millar and Romita Jr. tone the violence way down in order to focus on exposition and to relate the origin of Big Daddy and Hit-Girl told from Hit-Girl’s point of view.  Romita Jr’s artwork, as always is terrific and almost worth the $3 cover price all by itself.

The only bad thing about this book is that it routinely ships out late, but usually the wait is worth it. If only Romita and Millar could get it out on schedule without sacrificing the quality, we’d all be happy campers.

This entry was posted on Sunday, May 24th, 2009 at 5:57 pm and is filed under Uncategorized. You can follow any responses to this entry through the RSS 2.0 feed. You can leave a response, or trackback from your own site.